The goal of this project was to develop a VGA Capture expansion board for HDMI2USB on Digilent Atlys. The deliverables for the project were usable product with associated hardware, software and documentation.
Fine details of original goals were:
Original Proposal: http://goo.gl/rRtSrS

I achieved quite significant success, along with associated failures, in this project. While I failed to reach all the original proposed goal I have succeeded in getting the following working:
The Expansion PCB features a VGA digitizing IC from Analog Devices, AD9984A and has support for auto-detection and as well as EDID. Its design is production-ready unless issues crop in future during continued development on this project. 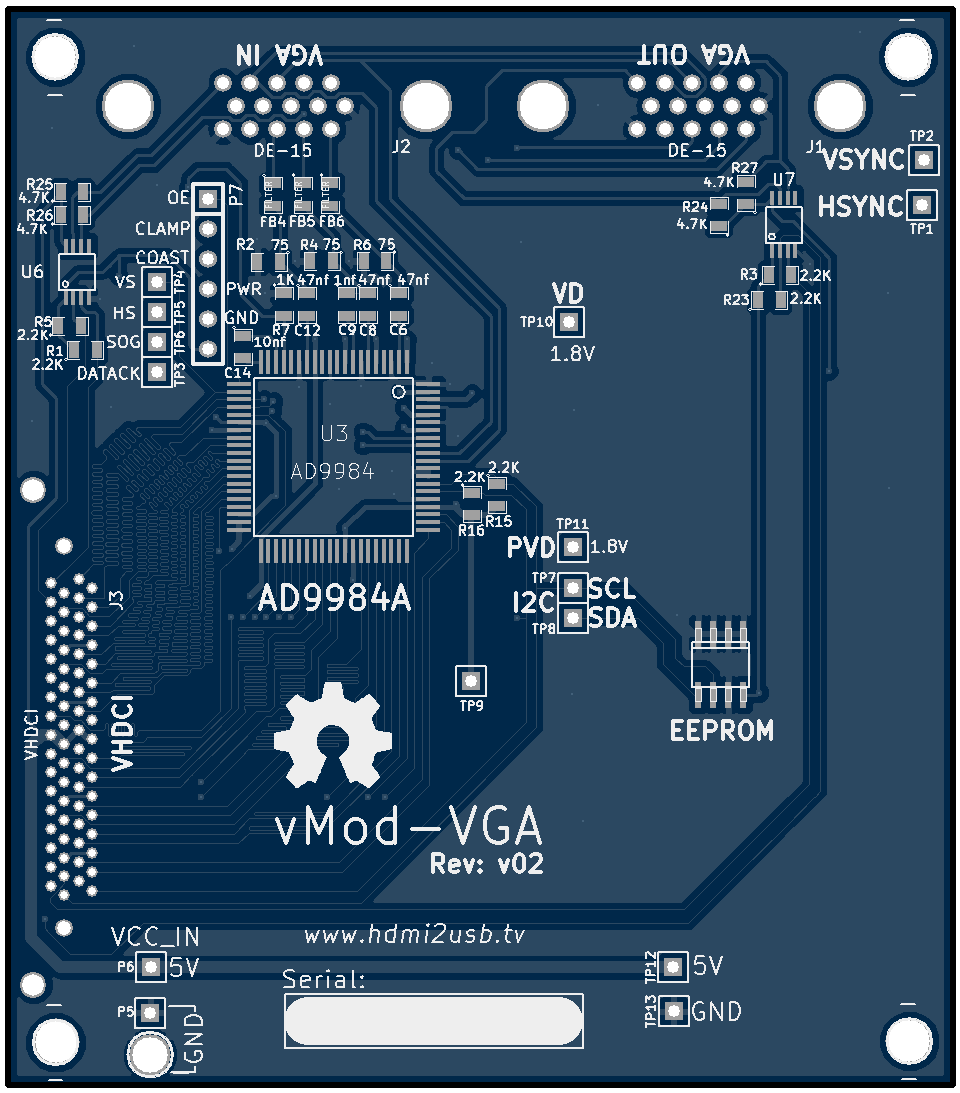 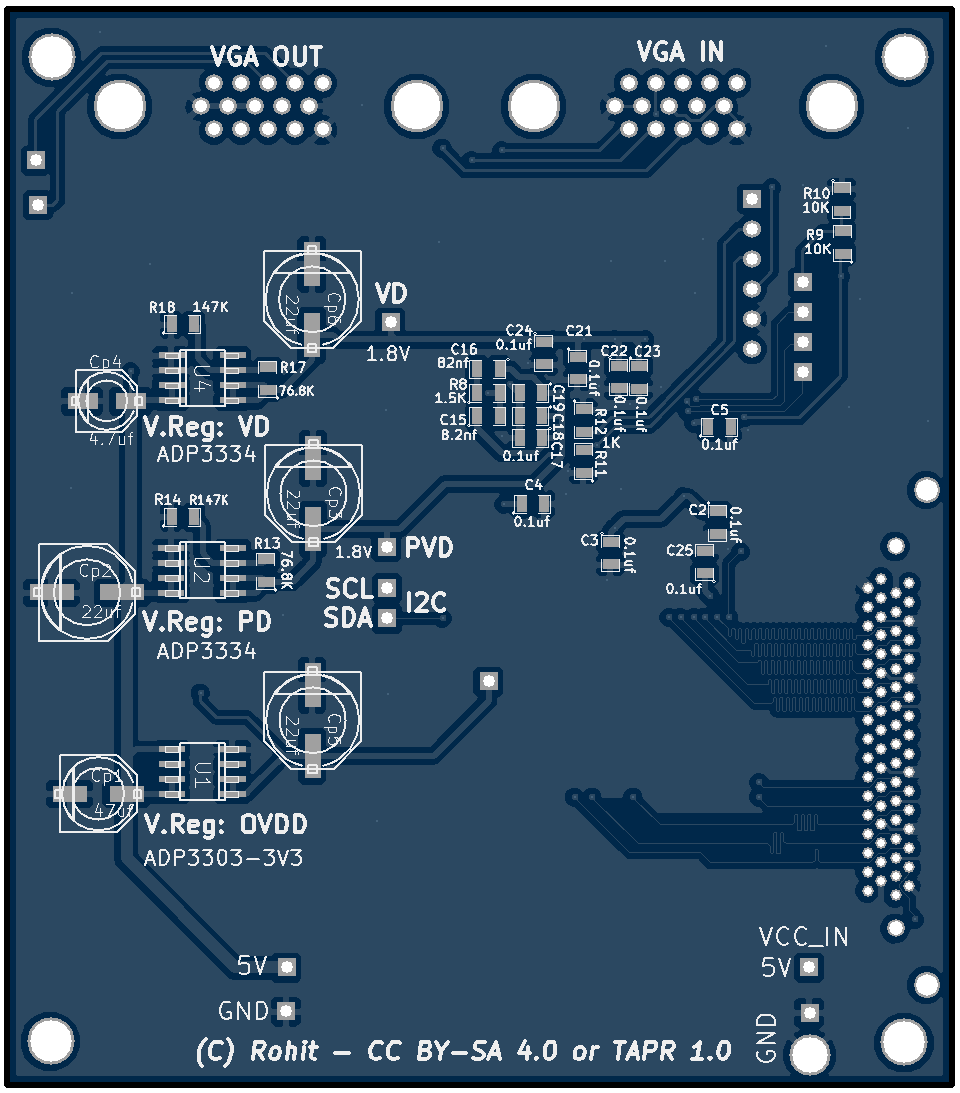 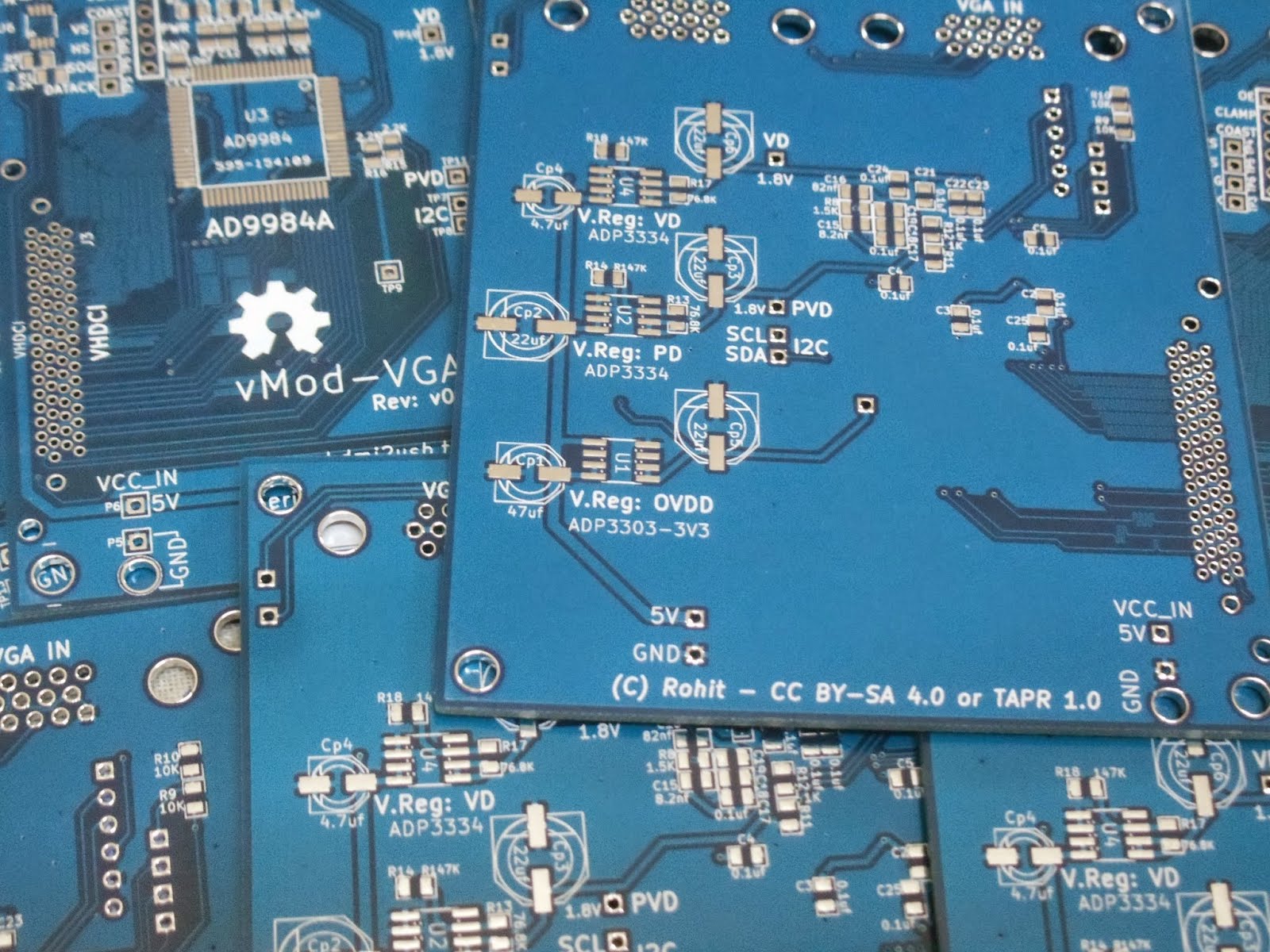 The VGA capture code, on other hand, needs improvement and ruggedness to field working environment. It is currently working very well with the latest PCB version, but continued development is required on it.
Video of current progress: https://www.youtube.com/watch?v=zSpOugDc2fM

With this project. I was able to get VGA capture working, albeit not perfectly. Most of the project time duration was spent on PCBv01, which was later realized to be buggy, after testing the PCBv02. I created a new PCB design which was fabricated by hackvana and I tested it. It has significant improvements over previous design namely test pads, intuitive layout, length-matched traces, VGA splitter output, autodetection capability, EDID capability and friendly silkscreen. Most importantly, it works much better than previous version!
The code is rudimentary, but it works. It is able to capture digitized VGA sent by AD9984A and output it using HDMI. It also features a picoblaze core for I2C configuration of AD9984A. Missing  features are autodetection, EDID hacking capability and most important, automated test infrastructure.
Upon completion, the major benefit this project provides is giving VGA capture capability to HDMI2USB hardware using expansion board. Minor benefits it provides are autodetection feature for boards, UART-I2C bridge, EDID hacking & logging and test infrastructure (not yet

How to replicate results

Required:
Repositories:
Link: https://github.com/rohit91/HDMI2USB-vmodvga
One can either directly order PCBs using the Gerbers present in the repository or modify the KiCad files and generate own gerbers. The silkscreen is labelled with each component and values for easier assembly.
Once the PCB is successfully assembled, its time to test them. Start with testing power supplies at the labelled test points (VD, PD & OVDD). They should be 1.8V, 1.8V & 3.3V respectively.
Now one can load the bitfile from HDMI_Test_v06 repo or HDMI2USB-vModVGA-TestBitFiles repo. The name of bitfile is hdmi_test_v06.bit.
For those willing to modify/edit/improve the code, use the HDMI_Test_v06  repository and load the project into Xilinx ISE, modify code as per your ideas and generate bitfile for flashing into Atlys.
There is no need for any I2C initialization for AD9984A as I’ve added I2C core into the projects. Even then if you want to see I2C Initialization scripts for BeagleBoneBlack, then they are located in i2c directory.
For any issues or help you can contact me on IRC: rohitksingh on #timvideos channel or Email: [email protected]. I would be very happy to help

There are quite a few issues still remaining with VGA Capture HDL code. I encourage everyone to fork and develop code for the VGA capture. I have 11 spare Rev02 PCBs remaining with me, and would happily courier one to anyone interested in contributing in development.
Here are issues remaining:

I have to admit I learned *significantly* during the whole project duration. Learnings I would cherish lifelong are Git(Hub), KiCad, improved SMD soldering skills, vast VHDL experience especially on clock issues etc and finally basics of open-source development and community culture! I wonder how I survived without Github until now. Having used KiCad so much during these months, I feel like an outsider to Eagle now. I made many new wonderful friends during the project duration! And best of all, I’m now officially a hardware hacker of HDMI2USB!